← Back to portfolio
Published on 6th November 2017

The Boston Globe unveiled Act II of its stage edition the other night with a production exhibiting the feel -- in newspaper terms -- of a new section beginning to find its footing.

At a time when news organizations are struggling to squeeze survival from 25 years of digital publishing, it was fun to join a standing ovation for some journalism even more old school than ink on paper: face-to-face storytelling.

Over the course of two evenings of good music and passionate storytelling, the Globe demonstrated to more than 800 paying customers (tickets ranged from $35 to $55) that its in-person narratives can be every bit as powerful as the journalism it produces in print and online.

But it wasn’t until several days after the show, in an email exchange with one of its creators, that I grasped a key difference between Globe Live audiences and those of its other platforms: Captivity.

“For two evenings, people have paid to see my work (and my colleagues’ work), they’re sitting comfortably in a dark theater (not hunched over a laptop), and their attention is mine,” said multimedia journalist Scott LaPierre, who produced a nine-minute documentary for the show with video producer Taylor deLench. “I don’t have to win it, I don’t have to worry that they’ll click away if I don’t start the video with a “bang!”

“The video starts in slower, more meditative way than any video I could make for the web,” LaPierre added. “I could relax with the pacing, allowing everything to breathe.

“The rules of good, economic storytelling still apply, but I didn’t have to lean on some of the pacing or editing tricks we subconsciously use when we know that the viewer can click away at any second. It’s a much more forgiving and appreciative audience (let’s be honest, it’s a captive audience), and it’s thrilling to edit for that audience.”

I was mostly fine with my captivity, happy to sit still for the alternately funny and poignant stories unfolding on stage. And while “Heart over Height” happened on screen, the in-the-flesh appearance of Johnny Ortiz in the balcony drew a standing ovation just before intermission.

With maximum choice and flexibility considered such consumer imperatives in the digital world, journalists have been understandably preoccupied with the conversion of fickle customers who may, as LaPierre puts it, “click away at any second.”

As glad as I was to relinquish that option, there were a few moments during the show when I felt a bit too captive for comfort, a few segments falling into the trap of otherwise engaging newspaper stories that don’t know when to quit. Squirming a bit as one of them pushed on too long, I was reminded of Roy Peter Clark’s take on stories with too many endings, a phenomenon he captures on a keyboard (the musical kind) here.

Several of the Globe Live segments could have worked as regular old newspaper stories, just not nearly as well.

Janelle Nanos, a business reporter by day, dug into the city’s 311 help line and found city employees helping residents with, among other things, the disposal of half a kayak and the recovery of dentures from an electronic trash compactor.

One edge that face-to-face enjoys over other platforms, of course, is emotion. Nanos made her way nicely from the absurd to the profound, detailing a 311 call from a woman with a needle in her arm saved by an operator who got her help and stayed on the line until it arrived.

We could have read deputy managing editor Janice Page’s account of the best day of her childhood as an essay in the paper. But we would have missed the film clips and montages from Nantasket Beach. Neither could we have appreciated the passion Page mustered as she described the loving rage of her mom, reflected in the segment’s title: “Screw You and Your Barbecue with the Pattersons.”

Some of the stories ranged well beyond the boundaries of print or online.

Michael Workman, an interactive designer at the paper, told the story of a journalist who falls victim to a catastrophe in the news, in his case ending up among 120 people left homeless by a raging fire in East Cambridge last December. But what really made his segment, subtitled “Finding perspective in what remains,” was the story he told of his wife, Dacia, dying of colon cancer at age 33.

Sharing details with the audience that he said he’d never discussed with his editors, columnist Kevin Cullen described how he reconciled the rules of journalism with his own humanity in reporting the story of a young Iraqi boy, Rakan Hassan, who was treated at Mass General Hospital after being paralyzed by gunfire in Mosul. His guide for this changed approach, Cullen said, was the example that Elizabeth Neuffer, a Globe reporter who died on assignment in Iraq, had shown him years earlier in Bosnia.

TV Critic Matthew Gilbert’s confession of his most mortifying moment as a journalist -- a fawning 1991 interview with Joni Mitchell that he recorded -- worked in so many dimensions that reducing it to print would have risked storytelling malpractice. With the full-screen image of Joni haunting the stage behind him, Gilbert’s raspy, recorded audio filled the theater: “You have great teeth, though.” The piece de resistance was all Gilbert: facial expressions that displayed a range of pain you had to be there to appreciate.

Not all the journalists-turned-performers were entirely comfortable in their new world. As much as the reliance on notes -- sometimes clutched in visibly shaky hands -- positioned the show way, way off Broadway, it diminished none of its appeal.

The tradition of journalists on stage goes back at least to the The Living Newspaper Project launched during the New Deal in the 1930s, a mostly unknown chapter in journalism history reprised raucously with song and story by Globe Live.

Just as the Living Newspaper was born of economic hard times, Globe Live is emerging in a publishing era that requires most every innovation to pull its own weight financially.

In an interview for a piece I wrote before the Globe rolled out its earlier version of Globe Live in May, Tim Marken, then chief growth officer for Boston Globe Media Partners, deflected my questions about the experiment’s revenues and expenses.

“It’s safe to say this will not be a big money-maker,” said Marken, who has since left the Globe. “When we move to sponsorship, we’ll have a much bigger opportunity.”

Without financial details the paper declined to provide, It’s unclear just how much bigger that opportunity turned out to be with the two sponsors lined up for Globe Live II.

As the “presenting sponsor,” a center for yoga and health in the Berkshires called Kripalu got an ad in the program, give-aways in the seats and, more significantly, an advertiser’s dream of an exposure opportunity: an extended infomercial following intermission that included a talk by the company CEO and a video. 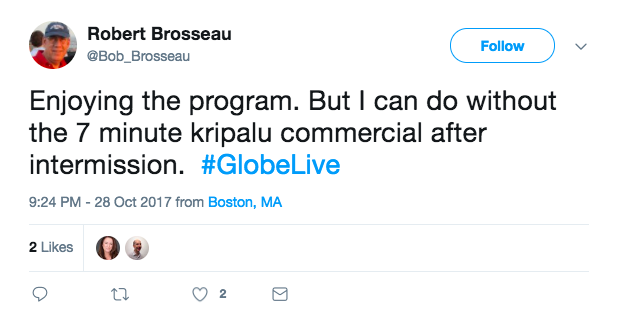 I was grateful to the company for sponsoring a program I enjoyed. I was sympathetic to its message (let’s all find a way to take a breath), and I like the idea of an advertiser with a good story to tell. But I wished that some of the rigor applied to regular program segments had been on display here.

The second sponsor, a planned community about 50 miles south of Boston called The Pinehills, drew about 30 people to a “Behind the Curtain” discussion of the show -- and all things journalism -- on Sunday. In addition to “a light brunch,” the $20 ticket (free to Globe subscribers) included a chat with Globe Live editor and director Scott Hellman and a few of the show’s performers.

In a story published last week, Helman described four goals for Globe Live: To introduce people to Globe journalism in a new way, expand the Globe brand, serve as a community convener, and to bring true stories to life.

Great goals. And from what I could see from my seat, all achieved.

But I wonder if Globe Live can succeed where other promising (but since shed) new initiatives at the paper -- Crux and BetaBoston come to mind -- could not: at the cash register.

As a subscriber and occasional freelancer, I hope the Globe finds all the new money it can.

“We are pleased that audiences responded positively,” Scott Halstead, managing director of the show told me in an email. “We ran two nights with a nearly sold-out theatre each night, further proving that this model of journalism resonates with our community.”

But just in case, if this is the sort of thing that resonates with you, I recommend buying a print or digital subscription if you haven’t done so already.