An Update on Dining For Darrell: Not Guilty! 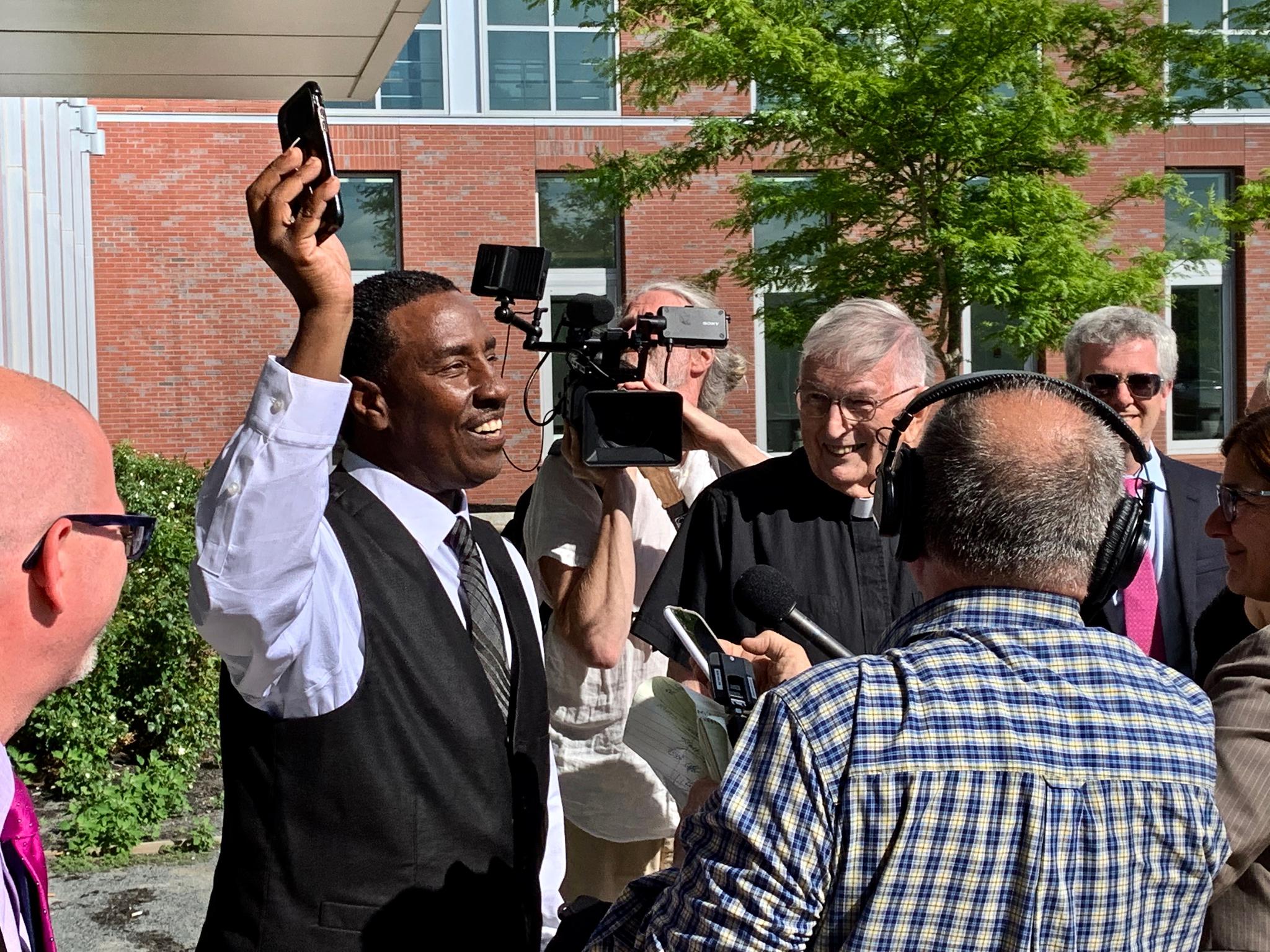 June 11, 2019 update: The jury took just over a couple of hours today to deliver the verdict that's been due Darrell for more than 34 years: Not Guilty!

Here are some photos I took at the courthouse and an account of the day's events from the Boston Globe. I've been in quite a few courtrooms, as a reporter, when verdicts were returned. This was the first time I experienced what it feels like when a friend is standing there awaiting such judgment.

Our friend Tim Kochems, who, like Carol, got to know Darrell while he was still in prison, provided a vivid account of what happened today:

It was another intense day of testimony. The testimony of one more witness who wasn't present and couldn't be cross-examined was read into the record. The prosecution rested its case.

The defense called only one witness, police officer at the time who identified Darrell as outside the bar, with other people around, minutes after the murder, talking with the first detective on the scene. That detective had denied this. The defense rested its case. The jury was finally told, in a list format, which witnesses were white and which were African American.

Then came final arguments with the defense going first. Paul was brilliant. So very clear, summarizing at the beginning and the end of his remarks the points on which, and the reasons why, the prosecution's storyline fails. He addressed the issues and confusion and self-contradictions around the "eye-witness" testimony in great detail and very directly, taking each of the witnesses one at a time.

Paul also built up to a very passionate and moving ending which had many people (including my self) in tears.

Fortunately, his 13 year old African American daughter was there to see him for the first time working in person.

The prosecutor was not passionate and built a case around "circumstantial evidence" that she believed if taken all together, should lead the jury to convict.
The judge then read 10- 15 pages of instructions to the jury. And then they were given the case.

Most of Darrell's supporters and Darrell went outside the courthouse to share a lunch, much of which was provdided by Pam for the third time with contributions from Pat and Sarah and Bill. Bill Barry said that the community spirit across age and race was quite remarkable and special.

As the afternoon went on, everyone's tension was rising.

We all kind of headed for the courtroom around 4PM to get the expected update from the judge. We were kept waiting about 15 minutes. During that time the number of court officers in the courtroom increased from the usual two or three to 7 -- throughout the courtroom, aisles, doors near the counsel tables.

The judge came in and said there was a verdict. He then addressed the public who was there quite forcefully saying that we had every right to be there, it was a case with a lot of public interest, and he could appreciate that we were there. He then said that the jurors had a tough serious job and they should be respected and that he did not want any show of emotion from the lawyers, the defendant or the public whether it be happy or disappointed, in agreement or disagreement. He said about ten times, each in a bit different way that if any of us felt we could not be STOIC and not expressive of emotion, then that person should leave the courtroom immediately. Anyone who showed emotion when the verdict was read would be considered in contempt of court and removed. (An aside: we had been there once before when he had another jury come in with a verdict, and there was none of this instruction to the observers and participant prior to the jury coming in and giving the verdict).

He then had the jury come in.

They came in all looking down and serious.

Darrell said he wanted out of the courthouse as soon as he could and he talked to all of us and the press people who were there when he got outside. We all cheered, clapped, and he thanked all of us.

And I now can finally thank all of you for your support for him and for us and for justice -- for many years. I only became involved around 2012, and he needed our support long before then. I am sure he will gladly take our continued support with him as he continues to be an ever greater force and activist for justice for innocent men and women everywhere.

June 3, 2019 update: An update for those who joined us last July for the Dining For Darrell fundraiser (we raised $1,130 for Darrell's car insurance): As you'll recall, Darrell's conviction was tossed after he served 32 years for a crime he has insisted, from the start, that he never committed. Now the District Attorney has decided to retry him on the charge, despite zero physical evidence, no motive and the insistence by witnesses that they were pressured by police to pick Darrell's photo from an array of images. Jury selection is scheduled for today.

At the time of the first trial, the prosecutor offered Darrell a deal: plead guilty to a lesser charge in exchange for a sentence of six to eight years. He declined, refusing to plead guilty to something he didn't do. Now the prosecutor is offering time already served if Darrell will plead guilty to manslaughter. Darrell has refused. Watch the Globe & WBUR for updates this week. (end update)

It takes a lot of good friends to assemble a potluck as fun as the one we enjoyed last night. Thanks, too, for the tasty dishes you hauled up the stairs to apartments 3 & 4. Kate and Marton and Carol and I really appreciate your friendship.

(For background on the event, see a copy of the invitation pasted below).

After I texted Darrell with the photo last night, he responded with this note:

"There are no words to express what this evening means to me... it will take me days, if not months just to process! I needed this moment so much.... I am so grateful for this day !! Thank you & Carol so much for this day !! Thank all your guests for their attention and investment in me. Love this picture!! God Bless you all!"

Also thanks to Darrell for suggesting the photo and to our neighbor, Naf Visser, for managing to get us all into his frame and looking so good (always nice when a professional photographer is among your guests).

At last count, we raised $1,130.00, which will go quite a ways toward getting Darrell underway and back on the road with some car insurance. (Late August update: we raised enough for Darrell's car insurance, and he's now a fully licensed and insured Massachusetts motorist!)

I'm sure many of you enjoyed meeting Melissa Ludtke (and eating her salad). Here's her Facebook post about the evening, complete with a suggestion to "steal this idea," a recommendation we heartily endorse.

A couple of snippets from the evening that you may have missed and we thought you might enjoy.

At some point while Carol, Bill Barry and Darrell were speaking to all of us last night, three year-old Mateo looked up at Kate and asked: "Mommy, when will it be my turn to talk?"

And just as Darrell, Bill and Christine were approaching Christine's car for the ride back to Weston, our neighbors, Makenzie, 8, and Ella, 5, realized they had some unfinished business.

I wondered what was up when I saw them running across the courtyard, waving their arms to make sure Darrell didn't leave before they were able to give him their allowance for the week. I adjusted the evening's take accordingly.

We hope you'll join us for Dining For Darrell at 6 p.m. Sunday July 15 and help him gain some traction on his new life.

Carol got to know Darrell a couple of years ago when he was incarcerated at the state prison in Shirley. Darrell (pronounced Dar-RELL) maintained from the very beginning that he had nothing to do with the 1985 murder in Brockton that had kept him locked up for 32 years.

Thanks to extraordinary work by WBUR's Bruce Gellerman and Jenifer McKim of the New England Center for Investigative Reporting, Darrell was released from prison in December after his conviction was overturned. The judge tossed the verdict as a result of his findings of police misconduct and racial bias on the part of the jury.

The Plymouth County District Attorney has not said yet whether Darrell will face a new trial. In the meantime, Darrell is staying with friends, looking for work and learning to drive. Friends have given him a used car. But in order to be able to drive the car to a job, he needs to raise some money for car insurance.

That's where we come in: Pitching in whatever amount we might have spent for a dinner out instead of enjoying a dinner in, provided by friends, at our place near Coolidge Corner. Kids and friends of friends welcome.

As many of you know, we've done a couple of these dinners before: Dining for Bushra in March, 2017 and Dining for Andrew in April of this year.

We hope you can join us!

I want to add to Darrell's thanks. What a wonderful group of people. I am so grateful to Bill and Carol for organizing and to all of you for making is such a fun and endearing evening. With affection for all, Bill