← Back to portfolio
Published on 6th December 2018 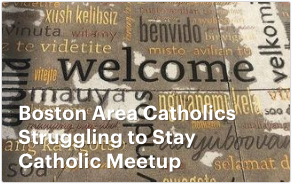 Background on the group: This is a group for any Catholics struggling to stick with the Church for whatever reason. Many of us have been especially discouraged by the latest developments in the clergy sexual abuse scandal, and many of us have struggled for years with Church teachings and attitudes about marriage, reproductive issues, clericalism and sexual orientation, among others. Despite these issues, we remain drawn to the church for other reasons. We're hoping to build a community of people who can draw support from one another and see where we end up. You can join us here: http://bit.ly/pcmeetup1.

The fourteen people who gathered in the third floor library of the Paulist Center last night included 10 women and four men and (by my rough guess) five people in their 60s, four in their 50s, four in their 30s and one 70 year-old. One of the participants had remained in the room after an earlier meeting on another topic and decided to stick around for our discussion. Another participant, an American living in London who's in Boston this week for a conference, just happened to be at Mass Sunday decided to come to the meeting as a result of hearing about it during the announcements.

We began a few minutes after seven and opened with the reading for Dec. 3 from the collection of advent reflections available in the vestibule, "Rooted in God's Vision."

Before beginning the discussion, Bill proposed some guidelines:

a. If you're an extrovert, consider holding back a bit

b. If you're an introvert, consider taking a risk and expressing yourself

c. In any event, once you've spoken for the first time, hold back on speaking again until everyone in the room has had a chance to speak

d. Let's agree that what's said in the room, stays in the room. Bill noted that he writes occasionally for NCR on topics like this. He said he may make reference to this group but will be careful to include nothing that identifies individuals.

Several people mentioned that they feel torn between a strong alliance with the Paulist Center and an increasingly fraying linkage with the Catholic Church writ large. Several mentioned interest in deepening their faith and spiritual life and said their ongoing connection with the rituals and traditions they grew up with in the Catholic Church seemed like the best framework for that to happen.

There was a sense in the group that attachment to the Church remains strong despite rather than because ofChurch leadership. Many said they feel especially at home at the Paulist Center, though not without some struggle. The extent to which rules of the larger Church are reflected in what happens at the Paulist Center, especially as those rules serve to exclude people who may be divorced or gay or in other circumstances frowned on -- as opposed to welcomed -- by the official Church.

Several people said they believe we're at a critical turning point in the Church at large. The Ninety-Five Theses came up a few times, prompting a reference to a more recent iterations at 5theses.com and https://yarespond.wixsite.com/catholic.

In the area of how we might nurture the Paulist Center community, suggestions included a wider range of music and even more attention to excellent preaching. Several expressed discomfort with the wording of the creed used at Mass and someone suggested replacing it with Baptismal Promises as an alternative.

Someone suggested that it would be good to have Mike McGarry in the room so the group could get a sense of what might be possible for the Paulist Center to do. Bill said Mike had told him that he thought it would be better that he not attend in order to encourage a more freewheeling discussion.

Most people in the room expressed interest in meeting again (no one explicitly opted out). The idea would be to continue exploring the topics touched on last night but also to consider taking action. How might the Paulist Center be changed, and who among us might devote the time and energy required to lead such change?

On the question of how receptive the hierarchy might be to such proposals from the laity and/or local parishes or centers like ours, a couple of people expressed the opinion/hope that the mess they've helped create might have "humbled" bishops enough to listen.

We ended the meeting at 8:30 p.m. with a moment of silence, followed by the opportunity for each participant to offer just a sentence about what they're taking away.

Bill collected contact information and will put together a Doodle poll to find a good date for a next meeting after the holidays.

All the participants were at the meeting as a result of word of mouth or the bulletin or the announcements after mass. Although neither the Facebook announcement nor the Meetup posting appeared to bring people in this time, the group will maintain a presence on both platforms as we see what continues to develop.

Excellent summary of a meaningful discussion. I look forward to our next meeting.

Nice summary, Bill. Since I was tardy, I missed the part about shutting up sooner! I will endeavor to do just that at the next meeting. A good start on a New Year's resolution!

Hello, Thank you for posting this summary. The group sounds very interesting and I like what had been discussed. I plan on attending tonight’s meeting. I will be coming from the South Shore and I’m not familiar with the area. Is there parking at the Paulist Center or should I give myself plenty of time to find parking?
Thank you, John

There's parking beneath the Common, John, but it's pretty pricey. One alternative might be to park at any Red Line station in the South Shore and ride it to Park Street. The Paulist Center is right across the street from Park Street Station (red doors facing the Common across the street).